Colour Series meets the Swiss Festival Arosa Electronica presenting a showcase together during the OFF SONAR Week in Barcelona. Join the Family for once here in Barcelona with a special line up that will kick start the Off Sonar Week for real.
Jem Haynes & SOAME will play alongside André Hommen, Sabb, Alex Clavijo & Bassel Darwish.

Colour Series presents another label night at Arosa Electronica Festival 2017. The thursday night is a very special night and the last couple of years it was always the highlight of the festival week. This time alongside Jem Haynes and SOAME will be Sabb, Smash TV, David Keno and Patrischa.

In the middle of the beautiful ski area we celebrate the Colour Series Daytime Event at the Arosa Electronica Festival. We are at the Hörnli Hütte over 2600 meter over sea level...
For Colour Series on the turntables are Jem Haynes, Solok, Tschan and SOAME.

The next Colour Series Night is coming. On friday the 12th of August Colour Series presents another night with Jem Haynes, SOAME, Sabb and Ronald Rowley at Klaus Zürich. Jem Haynes & SOAME will play all night long at Club Bellevue at the Colour Series Label Night. In their bags is their new EP "Streets" on Colour Series which got lot's of good feedback from Pete Tong, Anja Schneider, John Digweed, Claude VonStroke, Lee VanDowski and many more. Come in for a night of fun and good music.

This time during Arosa Electronica Festival Colour Series has its Label Night again on the thursday. The last two times it was always one of the best night with the most special memories for everyone.
We look that we can even top it this time with a Label Night at Alpenblick Restaurant. This Venue is in the Ski Area and especially the morning hours with the sunrise will be something very special.
Behind the turntables will be Jem Haynes, Karotte, André Hommen, SOAME and Ian Blevins.

This time during Arosa Electronica Festival Colour Series has also its Label Daytime Event. It's at SIT Hütte Arosa in the middle of the Ski Area.
Behind the turntables will be Jem Haynes, André Hommen, Ruede Hagelstein and Ian Blevins.

The next edition of the Colour Series Label Night is on at Club Bellevue in Zürich and there is another release to celebrate for. The new Release of Jem Haynes and SOAME on Colour Series is coming by the end of the month with the Remix of David Keno. Come and celebrate with us.

On the 15th of Mai Colour Series invites again for a Label Night at Club Bellevue in Zürich. Jem Haynes and SOAME will play all night long and also celebrate the new EP Release from SOAME on Colour Series.

Jem Haynes & SOAME will play at Arosa Electronica Festival. The special night will be Thursday the 19th March with the Colour Series Label Night together with M.A.N.D.Y., Karotte, Ian Blevins and Ryan O Gorman. But there are other Sets of Jem Haynes & SOAME and great music of amazing artists the whole week. So get your tickets.

After a great summer season its closing time! Jem Haynes plays at We Love...@Space Closing with Rudimental DJ, James Zabiela, Skream and many more.

This weekend We Love...@Space Ibiza welcomes Disclosure again and Jem Haynes will do his part again together with Paul Woolford, PBR Streetgang, Soul Clap and many more.

This weekend Jem Haynes is at We Love...Space Ibiza with Groove Armada, Kölsch Live, James Zabiela and many more.

Jem Haynes plays at this sundays We Love...@Space Ibiza again together with Sasha, Julio Bashmore, Catz'n'Dogz and many more.

Jem Haynes is playing at this very special edition of We Love...@Space Ibiza. It's Loco Dice Special Night with his only Set in this year Ibiza season and it's also his birthday bash. Alongside Jem Haynes and Loco Dice will be Chris Liebing, Martin Buttrich, Guti, Nightmares on Wax, tini and many more. 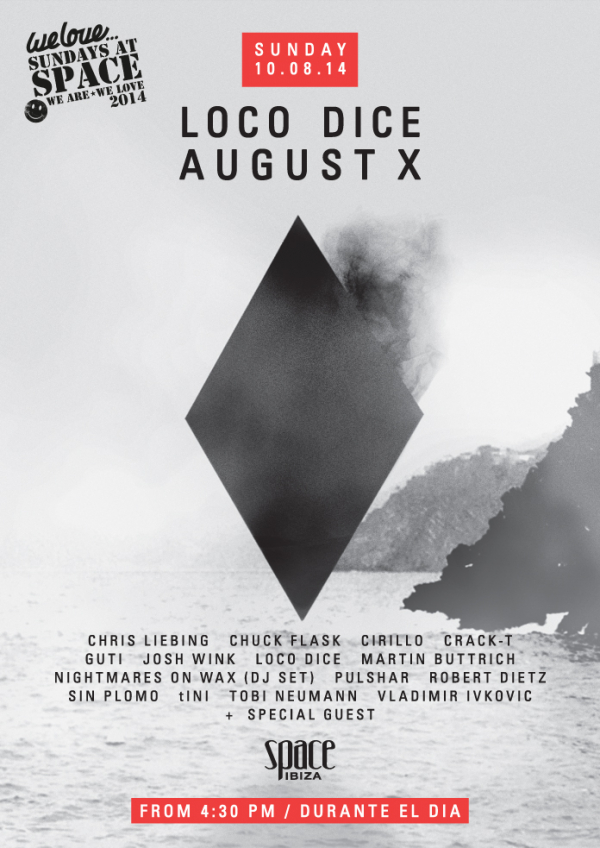 Playing at Stripped at We Love...@Space Ibiza with James Zabiela, Sasha, Heidi, Hot Chip, Magda and many more.

Playing at We Love...@Space Ibiza alongside Disclosure, Dusky, Midland, Visionquest and many more... 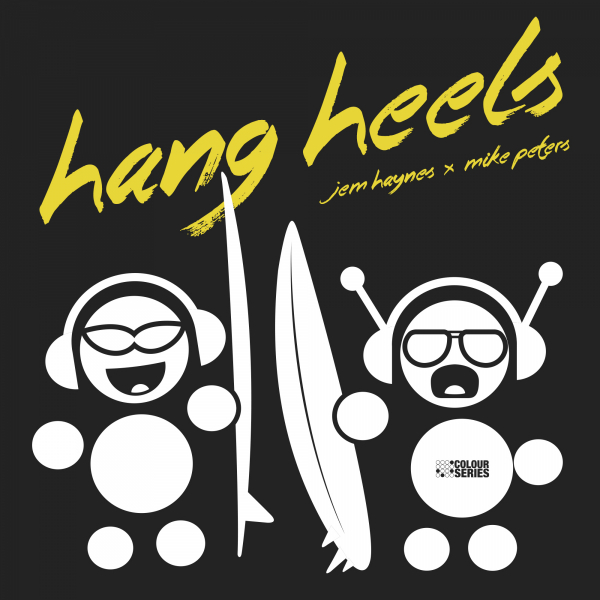 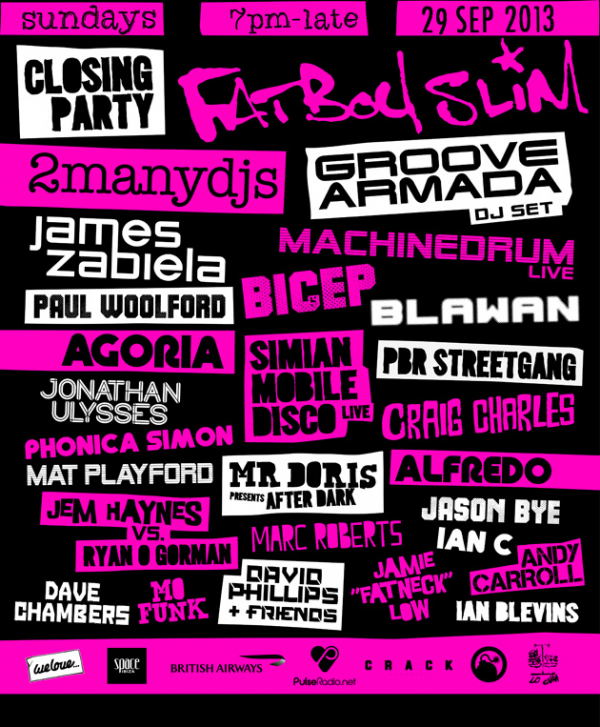 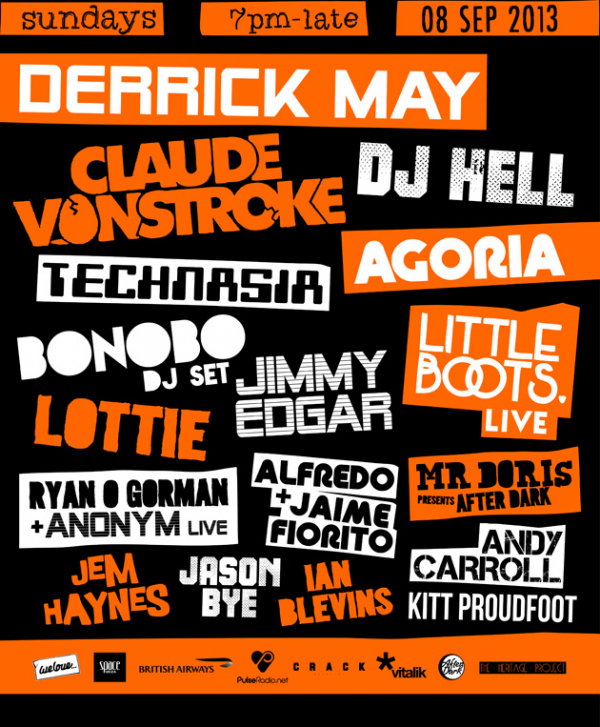 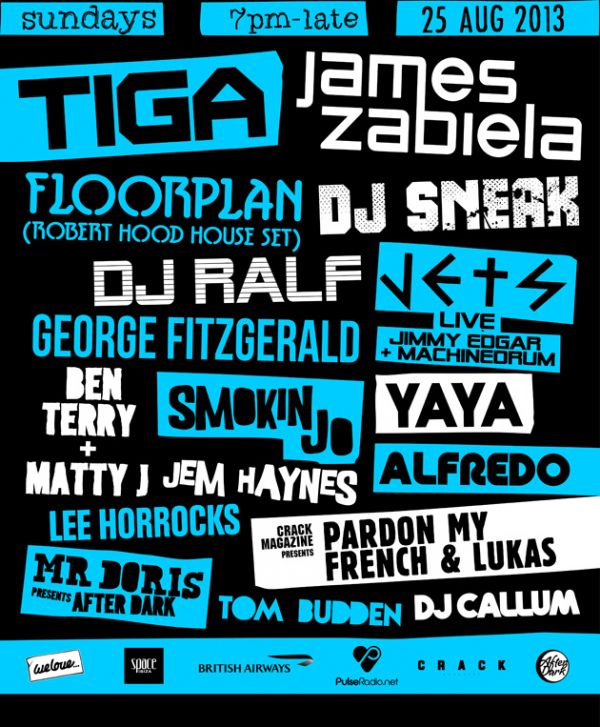 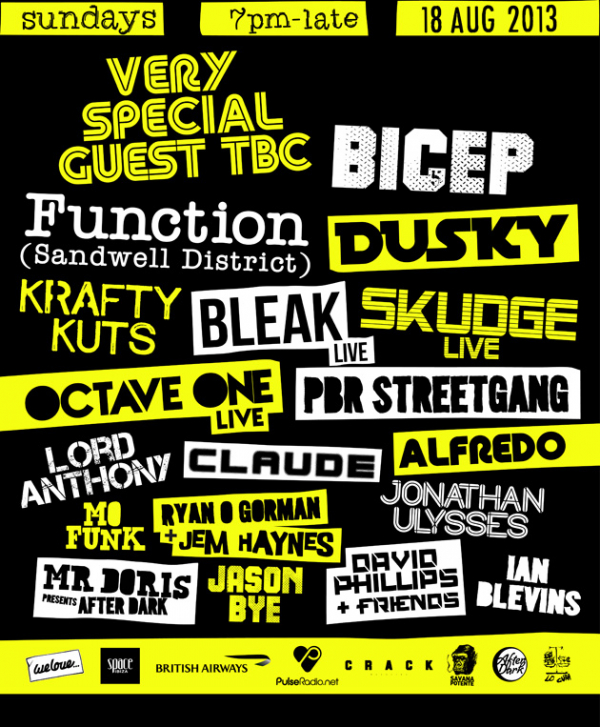 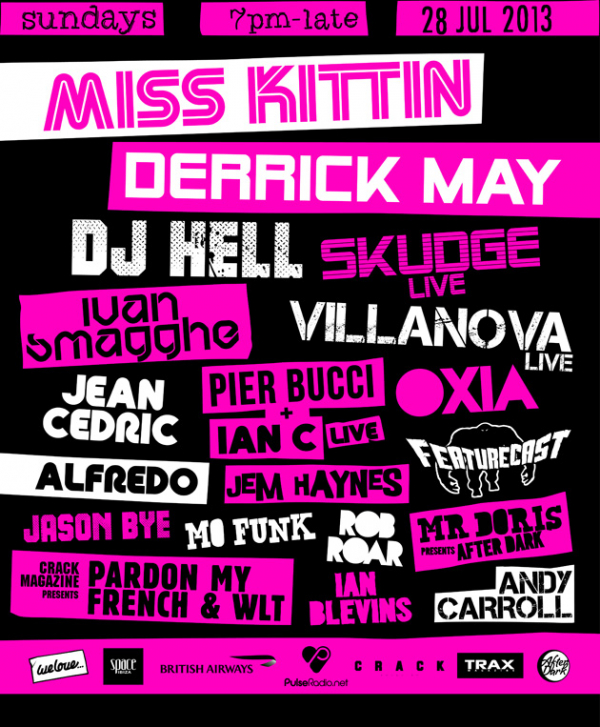 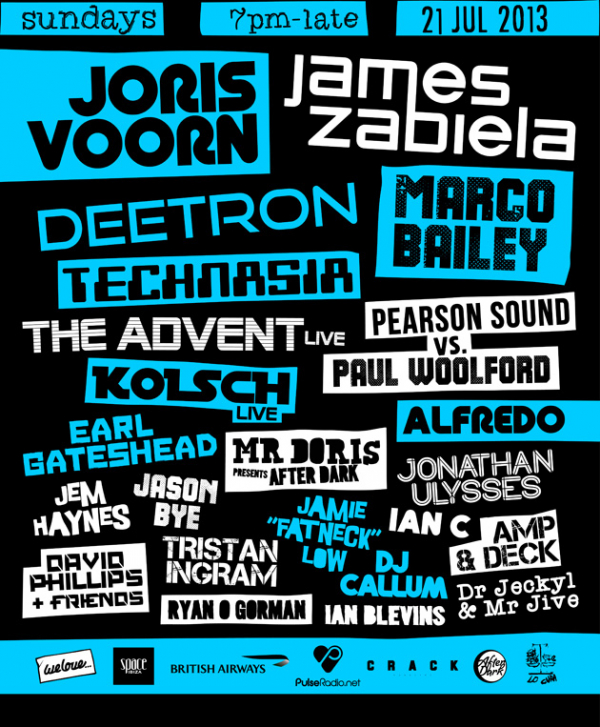 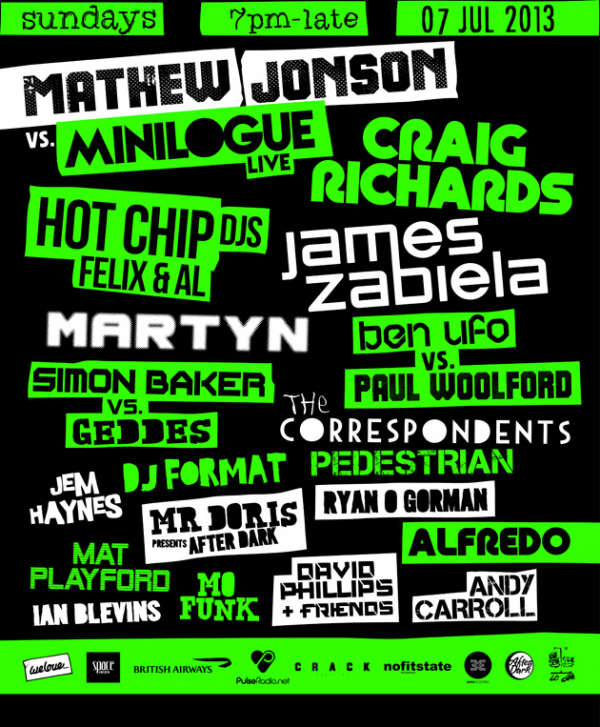 Groove Armada are back on headline duties on the Terrace this week superstylin' as only they know how. We're very pleased to welcome back Innervisions staple Âme who stacks up on the Terrace alongside long serving residents Smokin Jo and Jason Bye. Special guests Dense & Pika make their We Love... Space terrace and island debut. Another We Love...debut in the Discoteca this week as the Baron of Techno Dave Clarke brings the (White) Noise. Ex-Infine boss and We Love... favourite Agoria adds a French touch to the main room sound, London lads Simon Baker and Geddes play back to back and we've got yet another debut in the form of Psycatron who play a live set to finish off the room in proper no messing techno style. Our own Jem Haynes opens the room like no other.

Rob Roar headlines the Sunset Terrace and After Dark Mr Doris is joined by New York's finest Nickodemus, Australia's Mo Funk and Son Of Wales Phat Phil Cooper. Alfredo continues to reign supreme on the Premier stage this week with support from Ian Blevins and DJ Callum. Tom Pepe hosts El Salon and will be showing the world why locals know best. It's a house music thing on the Terrace this week. Joris Voorn takes the top spot for the first of three We Love... Space shows this summer and Heidi brings the jack. Fresh off the release of his new single, Tensnake plays live and Ralph Lawson makes his only Terrace appearance of the summer, not to be missed. Ryan O Gorman once again steps up on resident duties. It's back to Techno again in the main room with Detroit godfather and recent We Love... album curator Derrick May marking the start of his 2013 residency. The resurgent Paul Woolford flys solo for his second show of the Summer and both Skudge and Slam play live. Resident Jem Haynes kicks things off at 11pm.

Jonathan Ulysses looks to cement his place in Ibiza folklore and starts his 2013 residency with a headline slot on the Sunset Terrace. The man with the keys Mat Playford opens the room and the club for a sunset set on the Sunset Terrace. After Dark we once again hand things over to Mr Doris who is this week joined by Stickybudsand DFunk. Alfredo continues his weekly spot on the Premier Etage joined by Jamie Fatneck and local lad Ian Blevins. The Lo Cura crew step things up bringing a little crack den chic to the proceedings in the El Salon with David Phillips, Colin Peters, Stray Kitten and bloody Brian BeeZwax manning the helm. Chew The Fat! host the Discoteca for us this week with the chart topping Disclosuretaking the headline spot playing live in our main room. A winter of huge releases including the hit single White Noise which reached number 2 in the UK Singles chart has seen the duo rocket to stardom and we are very excited to be welcoming them back for another year running. On main support duties this week we welcome Dusky who make their We Love... Space debut and kick start a series of shows with us this summer. Huxley and Leon Vynhall also appear for their first shows with us and resident Jem Haynes starts things off. Over on the Terrace it's a couples affair with headlinersGroove Armada playing alongside The 2 Bears, Jaymo & Andy George, who make their Terrace debut, and Leeds lads PBR Streetgang.

A change of tack on the Sunset Terrace sees residents Jason Bye and Ian C warming up for Crazy P Soundsystem who play live for us until midnight. After Dark Mr Doris is joined by Kraak & Smaak and Trevor Mac for a Jalapeno Records take over. The Heritage Project step into El Salon as father and son duo Alfredo and Jaime Fiorito are joined by Ian Blevins making room on the Premier Etage for Ibizan Heat who call all night long up on the roof. 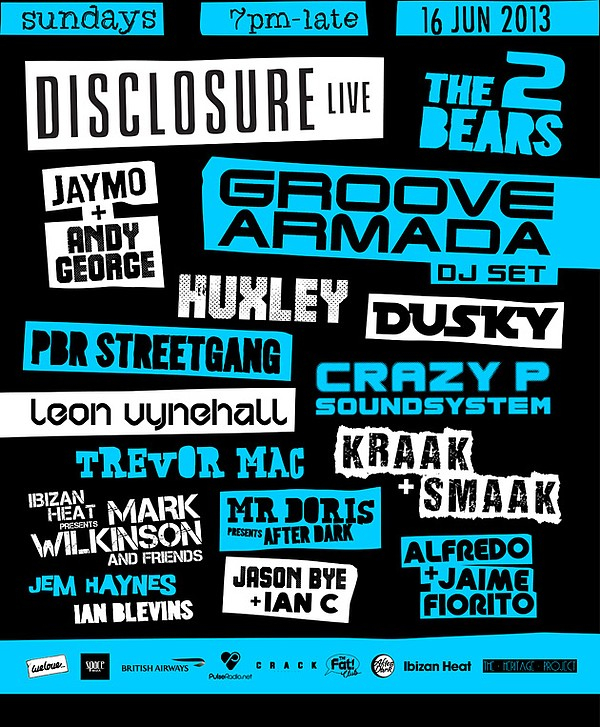 Setting our standards high for our 15th year at Space we kick Summer 2013 off with a bang. We first brought Carl Craig to Ibiza in 2007 and 5 years later we are very pleased to welcome him back for a very special one off Terrace performance. Joining him is Henrik Schwarz whose 2 performances last Summer are marked down as two of the best the Terrace has ever seen. This will be the first of two live performances for the Innervisionary at We Love... Space this Summer. The ascendent Bicep make their Terrace debut marking the start of a season of main room shows for the Northern Irish duo. Having seen the pair rise from the intimacy of our back-rooms to the point they are at today we are very happy to welcome them back for another summer at Space. A last minute booking in the shape of new/old kid on the block Hot Since 82rounds up the opening party terrace guests perfectly. Vitalik Recordings head honcho Ryan O Gorman is back on resident duties for 2013 and presses play on the first record on the Terrace for another year running.

James Zabiela headlines and curates the Discoteca showcasing his Born Electric label. Now into his 12th year as We Love... resident, James is as much part of the family now as he is a guest DJ. A back to back showcase sees the return of some familiar faces and the introduction of new ones. Paul Woolfordgoes head to head with Midland and Ben UFO stacks up next to Joy Orbison. Defining a sound and an era these artists come together for exclusive performances showcasing the best the UK has to offer.

Elsewhere around the club we've got an anniversary on the Sunset Terrace after dark as Fingerlickin present 10 years of Trickatechnology with A Skillz and Krafty Kuts. Smokin Jo headlines the same arena before midnight and residents Mr Doris and Jason Bye fill in the gaps. Balearic godfather Alfredo is back for another year at We Love... Space and is joined by Futureboogie'sDave Harvey, Joe 90 and Nick The Gardener on the Premier Etage as part of the Garden Festival's Get Together Tour where you'll find We Love... on a boat in Croatia later this summer.. It's a locals affair in El Salon as Lo Cura take over proceedings for the first of 8 shows this Summer. Tirk Records boss Matty J joins David Phillips and Northern lad Jon Woodall in Space's most intimate room.